I decided long ago never to walk in anyone’s shadows

A lot of people have been reacting over the last couple of days to the death of Whitney Houston. She was, obviously, a superstar, and like any superstar, the news of her death generated a lot of strong opinion and emotion, both good and bad.

But when I heard the news, my first thought was of a more personal moment. I was fifteen years old, and one of a number of sophomores who were tapped to be waitstaff at the junior/senior prom. We scurried around refilling punch bowls and setting out trays of snack food in the lobby area of the gymnasium at the local junior-high school while the older students got their groove on. It was their party, after all. We were just the help.

Just before the last song, the adult chaperones turned us all loose and told us we were welcome to dance that one dance before it was time for everyone to go home. Various of the other kids who were dating filed off. I wasn’t dating anyone, and I was shy, so I was kinda not sure what precisely I should do.

And then Shannon, who was one of my best friends, walked over, cocked her head to the side that way she would, and held out her hand. And we went into the gym, and I held her close to me, and we danced.

The song was “The Greatest Love Of All”, by Whitney Houston. It was a huge radio hit at the time. And that is, hands down, one of my favourite memories of high school, ever.

Goodnight, Ms. Houston. Thanks for being the soundtrack to a perfect moment in time.

When the phone rings at 6am, it’s never good news.

Got a call from telynor that Chris Croughton (keristor) was killed in an automobile collision last night. I’m absolutely heartbroken; he was a wonderful man, and a good friend, and I’m going to miss him very, very much.

kitanzi woke up this morning and found our cat, Jenna, had slipped away from us in the night. It’s unclear at this point what precisely was the cause; she’d been having some distress that we thought at first was hairballs, but may have been a more acute stomach irritation. Last night, when I went to bed, she jumped up next to me and curled up next to my side, as she often did. She was friendly and energetic all evening, so I do not think she suffered long. Whatever the cause, it was sudden and not protracted.

Jenna was one of the sweetest cats I’ve ever owned. She loved being near people, and I kept a folding table next to my desk with a fleece blanket folded on top of it, so she could curl up next to me while I played computer games. Her favourite spot on the couch was right in front of the arm, curled up against my leg while I’d watch TV, and she slept next to me most nights, at least for a while. She was often shy when someone new came to visit, but eventually she’d venture out and collect the petting that was her due. 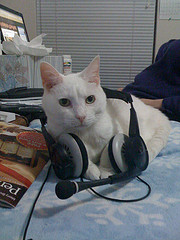 We originally adopted her through the Cat Clinic of Roswell to be a companion for Dayna, who was used to being in a multi-cat household and seemed upset to suddenly be alone. They never did get along the way we’d hoped, but in recent years seemed to have settled into a truce with one another, still not the best of friends, but no longer objecting to the other’s presence. I once joked that their relationship had “settled into an uneasy détente, so as long as neither one of then invades Afghanistan, I think we might at least have a sustainable peace.”

Back in May, she was suffering from some sort of intestinal inflammation that the vet was convinced was cancer. We were greatly relieved to learn it wasn’t, but had no idea how short her time with us was to be. In recent weeks she’d seemed to have been well on the road to recovering her appetite, gaining weight, and generally being more spry and social than she’d been when she was sick. I already miss her more than words can say, and I’m grateful she didn’t suffer long.

Good hunting, Jenna, wherever next you roam. You were a joy in our lives, and we are richer for the years you spent with us.

And suddenly the crystal hits the floor…

I take a pause this morning to remember two friends, both of whom are gone from our lives far too soon.

Canadian filker John Caspell passed away suddenly, while recovering from a motorcycle accident. I wish I could say I knew him well, but I never really got the chance. But he was always a warm and friendly presence at any convention I saw him at, and I will miss hearing him in circles. He was very dear to many people who are dear to me, and I will miss him.

Fantasy author Tom Deitz was one of the first people I met when I moved to Athens in 1989. He was an old college friend of stars_and_magic, and was a fixture at the frequent parties and gatherings we attended. He suffered a heart attack some weeks ago, and never fully recovered. He had a very wry sense of humour that I always appreciated.

I’ve considered Bob Asprin a friend for some years. He was never a close friend, by any means. I don’t have the long history with him that many others in the community did. But we knew each other, spent many long hours talking at various conventions, and he was someone I liked and admired. I’m very sad to hear of his sudden passing.

Gafilk was very pleased to have him as our Guest of Honour at the fifth Gafilk in 2003. (We knew he’d never be able to turn down a fifth.) He was concerned when we invited him, because he hadn’t played music in public for a number of years, but we convinced him that we wanted to honour him for all he’d done for the early filk community. He was a blast, and afterwards he started showing up at more filking events in the southeast, which really made me happy.

Funny story about Bob from that Gafilk. Gafilk V was the second year that quadrivium was providing the banquet entertainment — at Gafilk IV she’d played solo, and when we asked her to do it again, she said she would but only if she could get some people to play with her. So the banquet that year featured her on piano, with kiltedwitch on bass and spambrian on drums. We were sitting at the head table with the rest of the concom and guests. As the performance really started to kick into gear, Bob started getting more and more agitated, and finally muttered “I can’t listen to this.” and got up and left the room. We were a bit baffled at this reaction. Later, he explained that he was nervous as hell at having to follow that with his own concert and had a good old fashioned stage-fright panic attack.

He needn’t have worried. He went up on stage, did his old material and had the audience in the palm of his hand. Bob Asprin was always a great showman. Towards the end, someone asked him about the Kipling cycle he often would perform in midwest circles, and he said “Oh yeah. I haven’t done those in years.” He then proceeded to do the entire cycle. Off book. Flawless.

Time to crack open the old favourites this weekend. Thanks for all the stories and the songs, Bob. My world is a bit smaller today, but all the richer for what you left behind.

I very much want to believe right now that the traditional vision of Heaven that we were taught in Sunday school, with the clouds and the angels with halos and such, is real.

Because if it is real, I know that right this very moment Lois Mangan is pushing her way to the front of the Celestial choir and handing out NESFA hymnals to the heavenly host.

Requiscat in Pace, Lois.  You are greatly missed, but never forgotten.

I won’t even try to turn this into anything coherent. I’m not sure I can. First part is behind a cut-tag, because It’s a somewhat self-oriented review of getting the news.

END_OF_DOCUMENT_TOKEN_TO_BE_REPLACED

peteralway just posted to announce that his brother Dave passed away this morning, from apparent heart failure. He was 56 years old.

Dave was a frequent attendee to Gafilk in recent years, and he spent his final days surrounded by friends and family, sharing music and laughter. I hope that when it’s my time to go, I will have the same.

He was a warm, sweet, and caring man, and I was glad to call him my friend. He will be greatly missed by all of us.

John M. Ford has passed away.

I cannot say that I knew Mike Ford, outside of his writing, and a couple of fleeting bits of e-mail correspondence, once upon a time. But I will say this:

I hope that one day, when it comes my time to go, that I am remembered as well and by as many good people as he.

Thank you for all the words and the stories. Best speed, sir.

Thank you, good night, and may your God go with you

Irish comedian Dave Allen, famed for his TV routines as he perched on a stool with drink and cigarette in hand, has died in his sleep aged 68

North Carolina Public Television ran Dave Allen At Large sometime in the late 70s or early 80s, and I was instantly taken by his humour. I’ve listed him as one of my favourite comedians for years, usually to blank stares.

God bless, Dave. I hope when you meet God, you find that you were right: she *does* have a sense of humour.