To do him justice, I should really write an amazing parody of a hip modern song,full of wordy and nerdy nuances regarding his North Carolina upbringing and leading to his move to Atlanta via Athens, GA. A bridge in there somewhere would refer to his inevitable yet still heartwarming discovery of filk in the late 80’s via Off Centaur Productions tapes (including Quarks and Quests, which means I failed to drive him away, to our collective benefit.) The montage would come flickering by: alt.music.filk, rec.music.filk, Magic Carpet Con, DragonCon, housefilks. We’d come to the denouement, where he comes to GAFilk in 1999 and finds himself assimilated onto the concom as of GAFilk 2000 – becoming, to great acclimation and fame, chairman of said con. Then the epilogue, leaving the traffic of Atlanta for the coffee of Seattle, hinting at journeys yet to come but always coming full filk circle: giving back to the filk community in many ways, not least as a Director of Interfilk.

But while this would tell you of Rob and his journey, none of it would tell you just how much of a trip he is to spend time with. The man writes lyrics like breathing (or, as might be a better comparison, breathes like he is writing lyrics.) He can improvise a rant or pedantic lecture, bounce jokes or philosophies off any hint of a wall, and generally make everything he comes in contact with more fun. Except for the tarot trump of the Tower, which means you’re f……

He loves like he lives, with enough energy for everyone in his wide circle. Larissa is his touchstone and foundation, and the two of them exemplify a relationship of mutual support, respect, and … well, I’m fairly sure lust is in there somewhere. As it should be, of course.

I have been privileged to play RPGs with him for many years (his paladins are, shall we say, unique,) to have him as my ISP tech support, and most of all to call him one of my greatest friends. If you’ve come to many filk cons in the last 20 years, you probably know him and have gotten more than one grand hug of greeting or farewell or just because. If you don’t know him (and I refrain from wondering just how this could possibly be) then walk up with your arms wide, ask for a hug, and prepare to be engulfed.

This weekend he will speak as Master of Toast, and so shall he be heeded. There shall be wisdom, there shall be silliness, and often they shall be in the same words. His joy is infectious and his words worthwhile. Enjoy your time with him, for he will certainly enjoy his time with you. 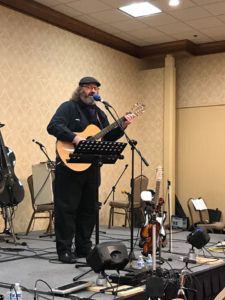 When Rob, Larissa, and I first discussed them moving from Atlanta to Seattle and rooming together I could not have imagined where things would go.  Rob was an amazing long distance friend (even if he did rope me into the game show at GAFilk the first year I went). He is charming, warm, caring, a great hugger, funny, and dedicated to the filk community and the people in it.

Several years ago he joined up on the Pegasus Committee to help administrate the Pegasus awards every year.  That was along with chairing GAFilk from Seattle, something he is still doing. Over the last year he stepped up and added an Interfilk position to his filker plate.

I have felt honored and humbled to be able to call Rob a friend, co-conspirator, and confidant.  I was thrilled when he was announced as our Toastmaster for this year, as I can think of few more deserving of being worked to exhaus… uh, honored as him.  Though on a selfish note I am saddened that I won’t get to hang out with him as much.

I know he will make us laugh a lot this weekend. 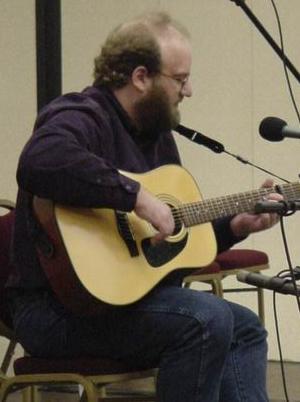 What can I say about Rob Wynne? Where do I start? Where do we separate fact from fiction? Do we talk about gun-running days in the Congo alongside a younger Dick Cheney? Do we speak of a tragic love affair with a Hong Kong opium den hostess and a daring escape from months of Triad sex slavery? Dare we bring up the rumors of the Raunchy Rob’s Georgia Big Lovin’ Shack drug bust which involved three different ex-Presidents, two prostitutes, a camel, a tube of wasabi and a ukulele?

Maybe not. After all, the Freedom of Information Act only takes us so far, and there are things that even filkers are not meant to know.

The mystery of Rob Wynne begins on June 25, 1970 in Williamston, North Carolina, a day where clouds hung in the sky heralding the arrival of something huge, something strange. Details are hard to come by. Inquiries made of neighbors at the time were met with cries of “Back! Back, you foulness!” coupled with the brandishing of crucifixes, but that may have just been my cologne. And yet, the black helicopters following me gave me an idea that the stories of genetic experimentation reaching across three continents may have some basis in fact. After all, when I first met Rob Wynne it was apparent that he and I shared much in common. I was 5 feet 2 inches, he was 18 feet tall in stilettos. I weighed 150 pounds, he weighed 3 tons (wet). He was born in June, I in October. I still had all my hair, and he had… well, some. The resemblances were uncanny. We were obviously twins. It was then he started sporting a beard, just to help people tell us apart.

Despite his stubborn silence when asked about his past, certain facts emerged from dogged research, the interviewing of contemporaries, and just plain making things up. He attended East Carolina University, majoring in making snarky remarks about dead writers, but did not finish, having left under the cover of scandal, coinciding it is said, with the closure of three sorority houses and the conversion of one into a convent under double secret probation. He found work in computers, which is where one can see the skill and cunning he used in fabricating and obfuscating his past to the point where we can no longer truly say that he was once indicted for mooning the UN Security Council.

He stumbled upon his plans for world filk domination in the 1980s, when a trio of mysterious strangers beckoned him to enter a room where they were playing music during a science fiction convention, enticing him into a larger world of darkness and madness. Details of bizarre rituals involving the copious ingestion of Yoo-Hoo and self-flagellation with a stick of butter cannot be confirmed.

Eventually, the darkness spread (as did his waistline) to Athens, Georgia, home of the alternative band R.E.M., to whom he soon became a figure of cult worship, known to them only as “Who The Hell Is That Guy”, or simply, “Who” as was Michael Stipe’s response when Rob’s name was mentioned to him.

It was also in Georgia that he began to attend filk programming at conventions starting in 1995. It was two years later that a hulking, shambling mockery of a man-thing showed up at Georgia Filker’s Anonymous (GaFiA) meetings – silent, dark, pendulous – sitting in a corner and generally bringing the vibe down until someone made the mistake of asking him to “stop your staring, damn your eyes, and play something already!” And he did. And after the bleeding from the ears had stopped, they asked him to play some more. In leather. With whips. And whipped cream. And a lubricated newt.

Rob writes his own songs and is relatively prolific, with many of them sinisterly available on the Internet to possess other minds despite complaints to the federal government to shut the site down. In a tremendous setback to his plans, many of his song virii were written in notebooks that were destroyed in a fire, and he abandoned his plans of infecting the world. And so we come to today, where he continues to live in Alpharetta, Georgia, with a dark shadowy presence only known as his “sweetie”, Larissa, and working ostensibly as a senior UNIX systems administrator. The rise in cattle mutilations and the disappearance of dogs around the area (and their oddly well-fed cats) are again, unverified allegations. He continues to write his songs, and fortunately divides his attention between work, filk, MUD Administration, comic books, fanzines and music. Some wonder what would happen if his unearthly focus is ever turned back to thoughts of world domination.

But then, perhaps, it’s only a matter of time.

Ladles and Gentlemints, I give you Rob Wynne, Interfilk Guest for the 2002 Ohio Valley Filk Festival.

God help us all.