I want to preface this post by placing blame, where it is appropriate. First, blame must be given to bedlamhouse , whose glowing praise — and the promise of an occasional companion on the journey — was what finally overcame my last objections. Some amount of blame must be laid at the feet of my boss, Scott, whose descriptions of it had also intrigued me, and who had addressed my most common objections to this sort of thing. But most of all, blame must be give to the lovely eloren , who has tempted me for four years and finally seen my will crumble like powder before her.

I’m talking about MMORPGs1, of course.

Saturday, I went and got a copy of City of Heroes for my birthday.

I have long resisted the pull of online multi-player games like EverCrackQuest and the like, usually for the very simple reason that I don’t have time, and I already get my gaming fix in on Thursday nights when I get together with bedlamhouse, surrdave, and some other folks to play AD&D. I just had a large sense of “eh” about the fantasy RPG ones. Star Wars: Galaxies had a chance to intrigue me, but from everything I heard, I’m just as glad I avoided it.

But City of Heroes….that’s comic books. How could I resist.

I picked the game up at Best Buy after kitanzi was done with her haircut, and installed it when I got home at about 2:30pm.

“To tell the truth, you could just play the costume generator for hours.
—eloren

As is typical for me, I put the manual aside and immediately started playing without reading a single word of the documentation. This isn’t because I don’t read instructions, because once I get around to it I tend to devour it, but I wanted to just see what was what, and how hard the game was going to be. First up was creating a character.

The game has five different archetypes and five different origins, which you can mix and match. So you can play a Blaster (ranged offense), a Tanker (high defense/melee offence), a Scrapper (also melee, but trading some defence for much higher offence), a Controller (mind control/physical control against enemies) or a Defender (primarily an assist-type character with some ranged capacity). In addition, you can choose to gain your powers via Mutation, Scientific Manipulation, Magic, Technology, or just plain Training. All of this comes into play in the game, both in terms of your strategies and also in what sorts of enhancements you can get later.

Then it’s off to the costume configuration. I decided out of the gate to play a Blaster, and chose the Fire Blast and Fire Manipulation power sets. With that in mind, I designed a costume around the idea of a guy who likes to play with fire. What i came out with looks like this: 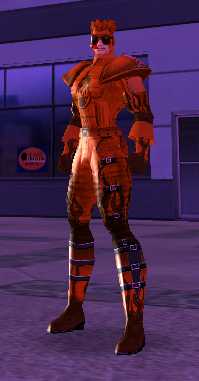 And thus was born Les Inferno. (While I gave him the name “Lester Carmichael” to explain away the ungrammatical French, in truth it’s a private joke that most Coupling fans will get if they think about it hard enough. *g*). The first mission you go on is an extended tutorial to help you get used to moving around and fighting, and neatly gives you enough XP to go up to Level 2 before dropping you off in the world. Once you’re out on your own, you can either get missions from your contacts (you start out with a contact in City Hall), or you can just cruise the streets looking for muggers to take out.

One of the best things about this game is how immersive it is. You really do start to feel like you’re inside a comic book. I especially like little touches like the signage on the buildings in the city. One that I spotted was a business called “Junk Depot”, which had a logo consisting of a large red J in a circle — a dead-on parody of the Radio Shack logo. Just behind Les Inferno in the picture above was a Greek restaurant called “City of Gyros”.

The best part of the game was when I hit Level 6, and got my first ability to fly. The power is called “hover” and it’s slow and non-useful for actual transportation from place to place (you can walk faster, let alone run), but it does allow me to pop up above the combat to use my ranged attacks. Prior to that, I was regularly getting my butt kicked by too-large groups getting me backed into a corner. Plus, when you need to flee a scene, it’s hard to beat straight up. 🙂

“Well, i’ve played City of Heroes, and it may not be online crack, but it’s at least online pot.”
—bedlamhouse

Sunday, bedlamhouse and i managed to hook up online for a little team playing, which was a lot of fun. It took us both a while to get used to making sure the other was where we were, and how to best utilize ourselves in combat (he was playing a Tanker to complement my Blaster), but once we got that down, it was amazing how our tactics just naturally evolved. We ended up running a mission that I’d already completed solo, and I was stunned at how much easier having just one companion made it. Every time we found some enemies, I would pop up into the air and let loose with my fire attacks at the edge of my range, and B. would just wade into them as I continued to pick them off. Even the big boss mob at the end of the mission was, while not a pushover, dispatched with a fair degree of aplomb.

If you don’t see me online in the evenings quite so much, I’m probably off saving Paragon City from the forces of naughtiness. If you have the game, feel free to drop me a line, and we’ll hook up in-game.