[Verse 2]
Quarantine
Time for you to stay there in the places you already are
Quarantine
There’s nowhere to go, ’cause they closed every café and bar
So just take off your jackets, put them in the closet
I hope at least you have a friend
Quarantine
Please stay safe inside until the outside is safe once again.

[Outro]
Quarantine
Please stay safe inside until the outside is safe once again.

I have to thank Trace Hagemann for being my muse and inspiring this! He posted a link to Semisonic’s “Closing Time” and said it was his quarantine music for the evening, and this formed in my brain. I guess I’ve now written my pandemic song.

Meet The Hipsters
by Rob Wynne
TTTO: “Theme From The Flintstones” by Hoyt Curtin, Joseph Barbera and William Hanna

Hipsters, meet the Hipsters
They’re a modern vintage family
From the streets of Brooklyn
They go on a thrift store shopping spree

For the record, I have nothing against hipsters. But someone posted this photo, and this just…came out. 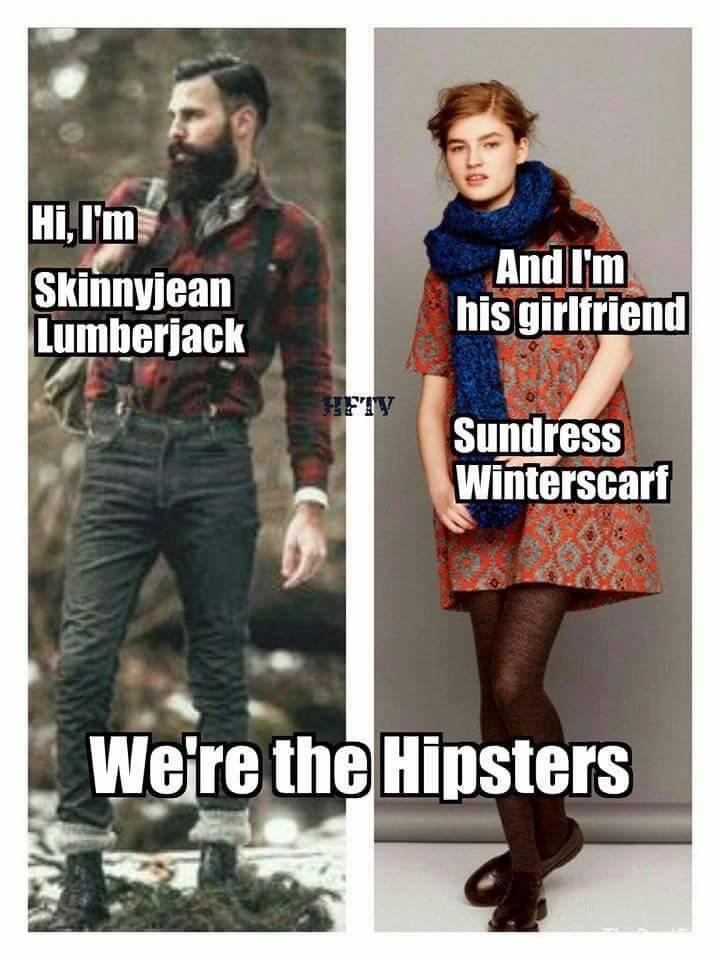 I’m gonna get myself a girlfriend
I’m gonna go make all these women see
That I’m a man who knows how to explain things
And all I gotta say is “Well, actually…”

I promise you that I know all about it
I’m quite an expert, you can surely tell
Don’t worry your pretty head about it
‘Cause I can make it simple as well

I know you’ll nod and see that I am right, here.
And jump into my arms and softly squee
You’ll fall for me the moment that I step up
To interrupt you, saying, “Well, actually…”

Yet somehow I wind up sad and lonely
It makes me so mad; I just cannot see
I know that I did nothing to deserve this
The only thing I said was “Well, actually…”

I promise you that I know all about it
I’m quite an expert, you can surely tell
Don’t worry your pretty head about it
‘Cause I can make it simple as well

I guess that she was just another hater
But I will get a girl eventually
She will not be able to resist me
When I interrupt her saying “Well, actually…”

Many thanks to Twitter user David Ballard (@dvdbllrd) for the inspiration for this.

Hope and Mercy
Words and Music by Robert Wynne
© 2001

While I did write this song on September 11, it’s not really about the terrible events of that day. One of the first reactions I saw to the events on rec.music.filk was someone who said, “I shall write songs of vengence tonight.”

This struck me as…the wrong approach somehow, and I got to thinking about how communities, such as ours, come together to face adversity. No matter what tries to divide us, we know we can build a better tomorrow together, because we will always have each other. This is a song about coming together and dealing with adversity as a community.

This song was published with sheet music in “September 11, 2001 – A Memorial Songbook.”

They landed on a foreign shore with no one else around
And said “Here in this frontier land, a colony we’ll found!
And since a free society is what we must achieve
No one here will tell just what you ought to believe!”

In time upon that virgin shore a mighty nation rose
And built their goverment around the freedoms that they chose
To speak their minds without reprisal and to print the same
And most of all, the right to choose just what their god was named

Much time has passed and once again the zealots have grown bold
They say the time has come that all the prophets have fortold
“This country has gone wrong,” they cry, “it’s up to us to fix!
We’ll save you from the heathens” but it’s all a bag of tricks

The fundies have forgot the things that made our country strong
They think that only they can know the truth of right and wrong
Be sure to keep an eye on them and every thing they do
Or else they may succeed in gaining power over you!

Some months later, Gwen Knighton asked me for help finding songs about the separation of church and state that she could play at a Unitarian service. We looked through all our songbooks and couldn’t find anything we thought was quite right, and so both set out to write something. Gwen emerged with the sublime Six Days, while I remembered that throw-away line and crafted it into this song. This is another song that always turns into a sing-along.

This song is written about the myth of America, rather than drawing from real history. I’m well aware of the shortcomings of those settlers with regards to religious tolerance, but I still hope it’s not too late to try and capture the spirit of the ideals they imperfectly enacted.

It’s a thing that shouldn’t happen, but too often now it will
And it breaks the heart each time you hear of someone’s children killed
Last night I turned on the evening news, and felt my blood go cold
And cried as I watched the story there unfold

The scene was Colorado, in a nice suburban school
Things like this don’t happen there! It goes against the rule
It’s not the inner city, but it happened just the same
And the reporters were all wondering who to blame

And you can say we need more gun control, or armed guards at the schools
Or that we could reach these kids with more counselers and their tools
But somehow I doubt it matters much just who the blame falls on
To a parent whose child won’t be coming home

What could have we done different? With whom can we find fault?
What can we do to bring this vicious cycle to a halt?
Each expert on the evening news has an viewpoint of his own
And each forgets the families left alone

I wrote this the morning after the Littleton, CO, school shootings, in an attempt to make some sort of sense of it all. It’s primarily a reaction to the talking heads and pundits who were all saying ‘Well, of course, this happened because…’ and proceding to try and tie this tragedy to whatever their pet theory about “What’s Wrong With The World Today, Especially These Kids” happened to be. The thing the media always loses track of is that these are, at heart, not national tragedies — they’re human tragedies…whatever the societal implications, there are families who are missing their loved ones tonight.

This song never did help me find any answers. It raised a lot of questions though.

I never perform this song.

We’d like to know a little bit about you for our files
G. Gordon Liddy’s on the air at ten
Please be sure to tell the truth and nothing but
Now could you please tell us where, with whom, and when?

Screwing in your office on a Sunday afternoon
Gonna raise an awfully big debate, yeah
Lie about it, dance around it, when you are deposed
Ain’t no way you’ll come out smelling like a rose

Hidden in an office where nobody ever goes
Secret Service standing by the door, yeah.
Please answer every question in graphic detail
Did you do it on the desk or on the floor?

(Chorus 2)
Where have you gone, H.R. Haldeman?
Even Nixon never was so bold
Whoa-whoa-whoa
Who ever thought in their wildest dreams
That Watergate could ever seem so tame?
Hey hey hey
hey hey hey

Another song about politics that’s hopelessly dated, but it was a lot of fun to write at the time. The whole controversy that inspired this song became ridiculous in short order, and I enjoyed poking fun at the media frenzy. Of course, I always enjoy poking fun at media frenzies.

The Media
by Robert Wynne
Music: “Opening Ceremonies (The Arbiter)” from the musical Chess
© 1998

We’ve a duty as the media
On the six-o-clock news
To bring you stories full of horror
tragedy despair
Do you care?
‘Course you do

We’re on the scene, the feed is live
We’ll interview the ones who survive
Oh we’re the media and we know best
Here’s the bad news, don’t bother with all the rest
We’ve got the verdicts straight from the courts
We’ve got a car crash, hold on for sports
We’re the media, and we have proof
All this carnage makes ratings go through the roof

If you wanted a slight change of pace
from all this gloom and doom
We have lying politicians, business fraud, lies, a
mother cries,
And weather too!

We proclaim the public’s right to know
But that’s just an excuse
To be quite honest, we’re all in a race
To win first place, sell ad space,
Now the news…

The immediate inspiration for this song was a thread on rec.music.filk about how the media propagates urban legends around Halloween time. I wrote at the time: “We have lost our innocence. Easy distribution of information (and misinformation) has made it not only easy to know what is going on all over the world, but damn near impossible to avoid knowing. And as we all know, ‘there’s no news like bad news'”.

On a related note, if you aren’t familiar with Tim Rice’s musical CHESS, check it out. It’s good, good stuff.

Gingrich of Congress
by Robert Wynne and Jeffrey Williams
Music: “Lord of La Mancha” from the musical Man of La Mancha
© 1998

Hear me now, all you old disenfranchised white men!
CEOs and your rich companies!
Clad in armor of God and American flags
I call forth my majority!

I am Speaker Newt Gingrich
I’m from Pennsylvania
But Georgia’s been kindest to me!
Political backstabbing’s
my bread and butter
I thunder on self-righteously

I am Speaker Newt Gingrich
I’m from Pennsylvania
But Georgia’s been kindest to me!
Political backstabbing’s
my bread and butter
I thunder on self-righteously

When I speak I weave visions of futures untold
Technological marvels are neat
But we must stay on guard from the liberal horde
Who aren’t among our elite!

The problem with writing songs about the news is that they are so quickly “overtaken by events”. I wrote this back when Newt Gingrich was still the Speaker of the House of Representatives.

While Gingrich did have his good side (he was a major supporter of the space program), I found his political tactics obnoxious and divisive, and lay a lot of the blame for the atmosphere that surrounds our political machine today on him.