IKEA
I just bought a book from IKEA
And the component parts just to make up a single word
IKEA, IKEA, IKEA, IKEA
IKEA!
I’ve just bought a book from IKEA
And assembling that text
Will find me rather vexed
and sad
IKEA
Shout out loud, find there’s a piece missing
Mutter soft, and you’re cursing and hissing
IKEA
I’ll never again buy IKEA
The most obnoxious book I’ll never read
IKEA
This was an insta inspired by this meme picture.  Everytime I saw it, I got the song in my head, so I jotted it down. 🙂 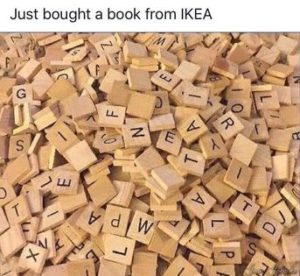 Undead cat
It’s not living now, and that is that
But somehow it still can move around
No you’re never gonna keep it down

Undead cat
In Spanish, viviendo muerto gat-
O, maybe someday when you’re on your own
Out in the woods, you hear a yowling moan
Won’t make it home

My brain and welcome to it.  (Sincere apologies to Billy Joel, and anyone with the slightest amount of taste)

Son Of A Son Of A Vor Lord

And my lady was born on Station Kline
Floating out in the space lanes
Fast on her feet, runs the whole fleet
And her beauty is matched by her brains

Wherever I go, I’ll find trouble I know
In deep space, or the Dendarii mountains
I don’t stop to reflect about what happens next
At least I didn’t end up an accountant

I started writing this song five or six years ago, and got stuck in the middle because I wasn’t even sure at what point in the series the song was set.  I put it away and ran across the notes on it recently while tidying up some old folders, and suddenly i knew what I needed to do with it.

This is based on Lois McMaster Bujold’s Vorkoskigan Saga, and specifically is set sometime before Memory, but after Miles has had time to establish himself with the Dendarii mercenaries.  So, maybe sometime around Brothers in Arms or Borders of Infinity.

I debuted this song in my concert set at Orycon 35 in Portland, Oregon.

Thirty miles from Memphis
There’s a wreck on the Interstate
Some folks crash and die,
While the rest reanimate.
They start to shamble towards my car
I think my time is running out
At first I feared they’d want to eat my brain
But now I don’t have any doubt.

There’s a dead woman next to me,
Right outside my Oldsmobile.
Half her body’s gone,
She’s too horrific to be real.
So young to be undead,
But she’s clawing at the door,
I think I could take her out myself,
But here come half a dozen more.

There’s a corpse standing by the on ramp
Gnawing on a dying man
His coat is stained with blood
He’s got a brain clutched in his hand
I could chop him into bits
And at first I think I will,
But his friends are closing in on me
And there’s more of them than I can kill.

Well, I went to talk to Piglet
Kanga, Owl, and Roo
I wish somebody’d told me
That Tigger’d be there, too

Now I’m hanging from balloon strings
I’m a desperate bear
Send lawyers, guns, and honey
The bees have seen me there

Naismith (Not Vorkosigan)
by Robert Wynne
Music: “Istanbul (Not Constantinople)” by Jimmy Kennedy and Nat Simon
© 2004

Even young Lord Mark was once a clone of Miles
Which was which, you couldn’t say
Sur Galen liked it better that way

Miles Naismith was once Lord Vorkosigan
he’s Adm’ril Naismith, not Lord Vorkosigan
Pretending that he isn’t Vorkosigan
When chaos and confusion start to mount
That’s nobody’s business but the Count’s.

Miles Naismith!
Another song based on Lois McMaster Bujold’s brillient Miles Vorkosigan series. This is a difficult song to sing, in part because the original is tricky to begin with, and I had to play loose with the scansion in places. It *does* scan, once you find the pattern of the stresses required.

The Last March of Gondor

The Last March of Gondor
by Robert Wynne and Larissa March
Music: “Least of My Kind” by Cat Faber
© 2004

Armored in in battle mail,
Swearing we shall not fail,
Cursing, we ride to Mordor’s Door.
Men, elves and dwarves unite
Facing the Shadow’s might
Here is a challenge he can’t ignore!

One day may tell the tale
Courage of men shall fail
That will not be this day, I swear
Look on me now, Dark Lord
Reforged, the broken sword
Thought you that Isildur had no heir?

Ultimately, this song was inspired by a typo. Gwen Knighton was discussing the second album release of her band, Three Weird Sisters and accidently typed the title of the Cat Faber song “Least of My Kind” as “Least of My King”. That sparked the idea of an LOTR themed parody of that tune.

One of the nifty additions to the movie versions of Lord of the Rings is Aragorn’s “St. Crispin’s Day” speech, as the assembled Army of the West stands before the Gates of Mordor. I imagined how bards might remember that in song, and this was the result.

This is the first song that my wife Larissa and I wrote together. It was an enjoyable experience, and hopefully one we’ll repeat.

This song was published in the Conterpoint 2004 songbook, and in “Under Filk Wood”, the songbook for Interaction, the 2005 Worldcon in Glasgow.

Sauron
by Robert Wynne
(Thanks to Dave Weingart for the second half of verse 1)
Music: “Do Ron Ron” by the Crystals
© 2001

Yeah…..the rings unmade
So…..the world was saved
And…never more we’ll fear
a Sauron-ron-ron, a Sauron-ron
A bit of silliness that came out of a long afternoon on #filkhaven. I tossed out the first half of the first verse, and Dave Weingart tossed out the second half, and I thought “Hey, that’s not a bad idea” and quickly finished it. This one is an infectious sing-along, and always helps bring the mood of a circle up.

This song was published in Xenofilkia #78 and the Gafilk 2003 songbook.

Novel man, please hasten
Up that scene, time’s wastin’
Novel man
The advance has long since been spent

Novel man, please end it
It’s much harder to defend it
Novel man, It once was so promising
Now it’s a joke

He may write this series for infinity!
This song isn’t about one particular writer, but could easily be applied to any number of authors currently mining the low grade ore out of the science fiction and fantasy mine. There’s some really good deposits down deep and off the main shaft, but some folks manage to get rich selling the same stuff off the top over and over again.

Oh well, they keep printing them. I guess SOMEBODY’S gotta read them.

This song was published in the Gafilk 2006 songbook.

Cetaganda ghem girls are always so very nice
(On) Jackson’s Whole you can get whatever you want
If you’re willing to pay the price
Beta Colony girls all have such an open mind
(But) I cant wait to get back to Barrayar
Back to the cutest girls you can find!

Delia’s the tall one, with her golden hair and face
Olivia’s an athlete who can run with the boys
(But) never lacking style or grace
Martya’s often quiet, but she hides a razor mind
And Kareen, Kareen, she’s such a dream
Any one of them would do just fine