And lo, there were shelves for the books to rest upon

One of the problems with a small apartment occupied by two bibliophiles is the matter of where to actually PUT all the books. There really just aren’t that many good places to put bookcases, if one is to have any other furniture in the place.

When I was visiting djbp and bardling last month, I got to admiring the wall mounted track shelving they had up for bookstorage in one of the upstairs rooms. It occurred to me that this could be the answer to our problem. Since it was wall mounted, I could simply have shelves cut to whatever length I wanted on that part of the wall, and since they didn’t have to reach all the way to the floor, they could be placed above other furniture.

Last night, I dropped by home depot and picked up some supplies. Rails, brackets, and a 1×8 cut into five 27.5″ pieces, which was the precise distance from the wall to the edge of the window in our computer room. This is the room where the guest bed is deployed when we have visitors, so we wanted to arrange the room in such a manner as to not require extensive shifting about to put the bed in place.

Things didn’t go as smoothly as I’d have liked. I discovered rather quickly that the studs in the wall were made of metal, and as a result I made another trip to Home Depot to get some drywall-anchor screws so that the shelves could be mounted between the studs instead. Then I found that the particular drywall used here was so soft that if you weren’t careful, when the anchor finally was fully caught it would start to burrow through the wall. There are, as a result, a few more holes in the wall than I had originally intended. But they are all in places where the shelves are, so they’re not really noticeable. I’ll get some plaster later and fix them up.

Anyway, I finally got it all up, and populated with books, and it looks rather nice in the end, so the frustration was ultimately worth it. 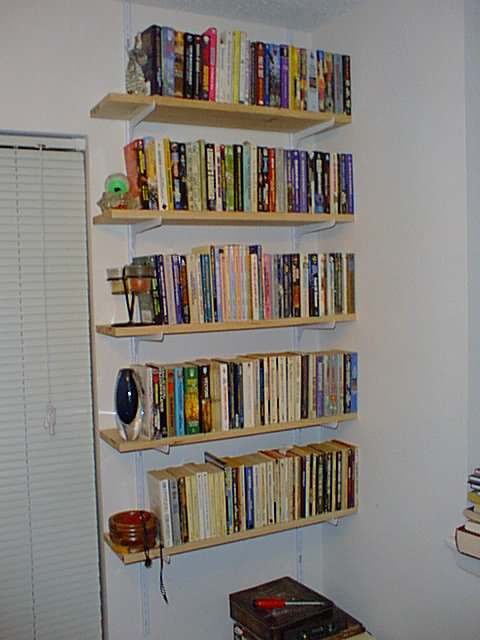 After completing the shelves, I called my Mom to thank her for the lovely St. Patrick’s Day card. I was rather pleased to see that she sent a couple card, rather than just to me. I pointed out to kitanzi that I couldn’t recall her ever doing that when I was with my ex, so that must mean she passed inspection. 🙂

We decided to spend the rest of the evening watching something silly and light to lift our spirits. In light of current events, I decided I wasn’t really up for more M*A*S*H — I didn’t really want to see a war themed show, even one as solidly anti-war as that. So we watched the first two episodes on the season 1 DVD of Coupling, which was just what the doctor ordered. Extremely funny, and I went to bed in a much better mood than I would have otherwise.