Once is happenstance. Twice is coincidence. Three times is….tradition! 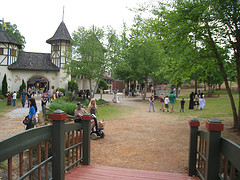 It has been our custom, in recent years, to celebrate kitanzi‘s birthday with a trip to the Georgia Renaissance Festival, though we missed it last year (ultimately getting our ren-fix at King Richard’s Faire in Massachusetts). There were solid reasons to consider not going this weekend (I’ve been having some trouble with my hip and the faire involves a lot of walking), but I’m tired of coming up with reasons not to do enjoyable things, so I elected to uphold the tradition. Besides, late April really is the best time to go for Georgia’s faire — it’s early enough in the season that the weather tends to be a bit cooler. This year we were graced with nearly perfect conditions — slightly cloudy, breezy and warm but not hot.

We took off early from home, aiming to hit the gates at opening. We detoured by Ikea to pick up our friend Alice, who was spending the day with us, and headed south…down the wrong interstate. This is what happens when you don’t take the GPS because you know where you’re going, but the conversation in the car is more interesting than navigation. *blush* 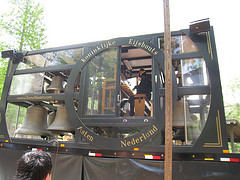 The crowds were noticeably thinner this year than in the past; I have no doubt the economy is biting luxury entertainment like RenFaires pretty hard. We wandered in and out of shops, picked up some brunch from one of the food vendors, and sat and watched people go by for a while while we contemplated what shows we wanted to see. There was some new stuff at the Faire this year, and some people noticeably missing. Most conspicuous in their absence were The Lost Boys; in fact, there were very few musical acts on the grounds this year. Three Quarter Ale and Groghat shared the tavern stage, and besides them, there were none of the more traditional musical acts there.

There was, however, one rather astonishing non-traditional musical act. Cast In Bronze featured a single performer playing a four ton carillon which was simply awesome to behold. Most of his act featured recorded backing tracks, onto which he’d add a dizzying array of bells and chimes. When he started into “Tubular Bells”, I nearly fell off my bench. Great stuff.

kitanzi: Can you imagine playing something like that?
autographedcat: Hard to set up in the filkroom, though. 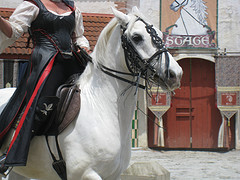 The other event which was new to us was All The Kings Horses, an absolutely stunning display of dressage featuring a trio of stallions (one Lipizzan, one Andalusian, and a black beauty whose lineage I am unsure of — plus an American-bred miniature named “Goliath”). The performance was a wonderful combination of artistry and horsemanship, and I wish I’d had time to go back and catch their show again before we left that day.

We stayed until after 3pm, which was later than we’d originally thought we might, and headed back to the car just as the rain started to roll in. After dropping Alice off at Ikea, we headed home for a relaxing evening with takeout from the Greek place on the corner and a couple of episodes of QI.

Not a bad way to spend the weekend, if’n I do say so myself.